We had a bleak and bitter weekend here in Canberra ... the wind whipped down from the snowfields bringing a bit of rain, a bit of sleet and snow flurries. Saturday we spent visiting EVERY GODDAMN LIGHTING SHOP in Canberra which made it very clear very quickly what we don't want. I'd been looking at a thousand things on-line but I don't think I can buy a light without seeing it in person. Anyway I think we have chosen one which is very exciting, even though they will have to order it from Denmark and it will take 12 weeks. 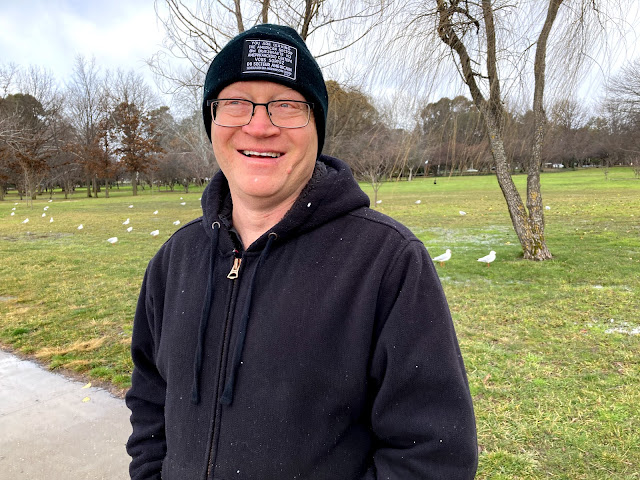 Sunday it was supposed not to rain in the morning so we thought we'd do a quick 10km walk around the east basin ... and we got snowed on. Not a lot, but even a little bit of speckly snow is offputting when it's being driven into your face with 40 km/hr winds. On the plus side, there weren't many people about. 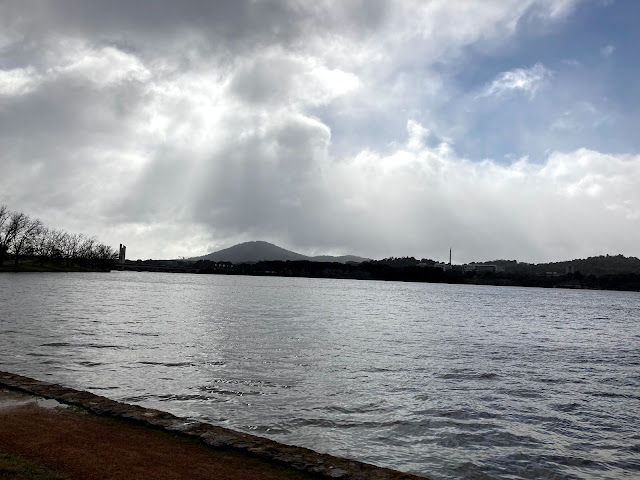 At least a long cold walk gave us the moral authority to stay by the fire all afternoon .. until we went round to friends for drinks ... and that was the weekend! Other than the usual boring things relating to laundry, cooking, driving children places and a little bit of sewing.

I took a week's leave last week to recharge and re-invigorate! We are in the long winter parliamentary break, so a perfect time to slide off work for a week. I went to the coast for a few days, then back to Canberra to get my second vaccine shot (so I'm now fully vaxxed! yay... it is surprisingly reassuring), do some chores around the house and then this week back at work. Boo. 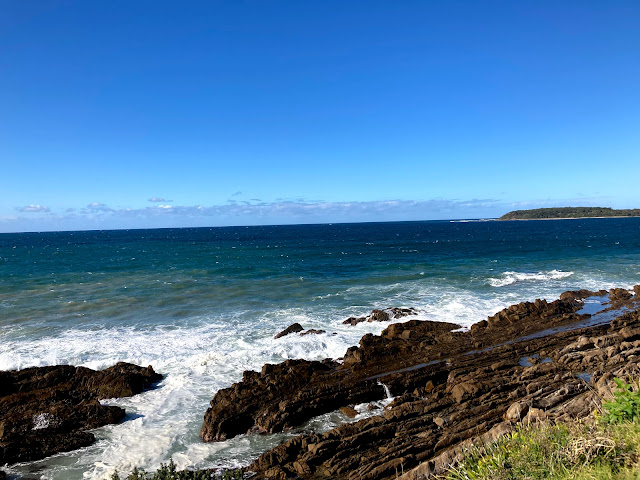 The beach was lovely but cold. Grey skies some days, and when it was sunny it was super windy. Look at those white caps! I was not inspired to jump into the water, just a few long walks and not much else. 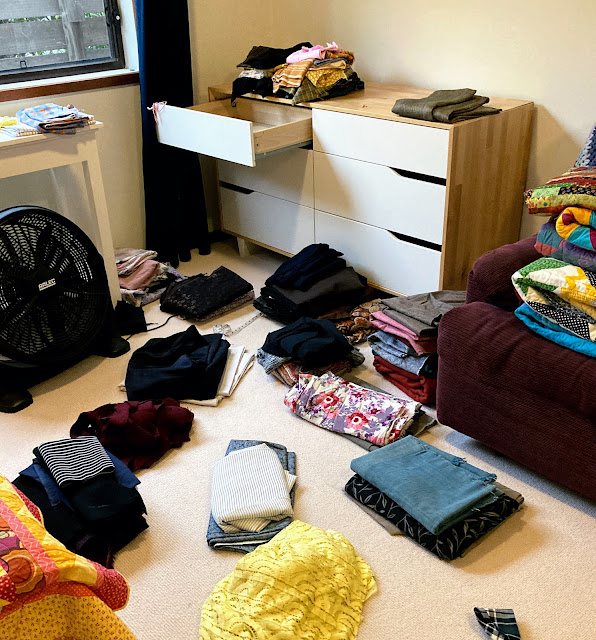 I did turn out my drawers full of material to see what I had and what I could use. There were a few forgotten gems in there, and a few small bits I could throw away. I have found an on-line recycling place for fabric scraps so I will wait until I get 10 kg together then post them off. I feel bad about putting them in landfill. 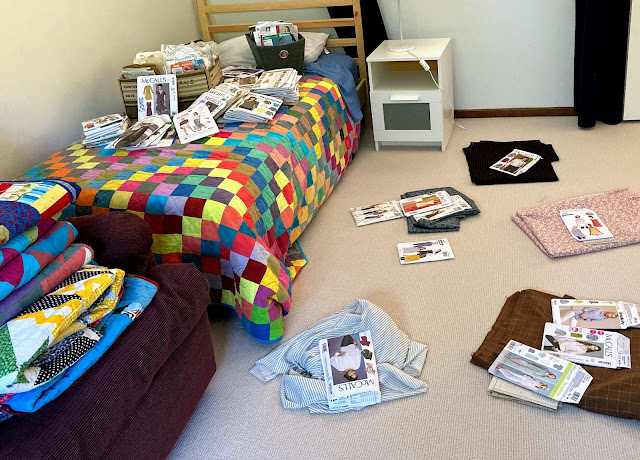 I also got all my patterns down and went through them. Yes, there are heaps and heaps but some of them are from the 1980s! And I think pre-printed paper patterns will be going the way of camera film before too long, so I feel no guilt about having a massive stash. Because I was down there for a few days I made a bit of  plan, and laid out the fabric I thought about using with the patterns that might go with them. Awesome fun to do, and very motivating. 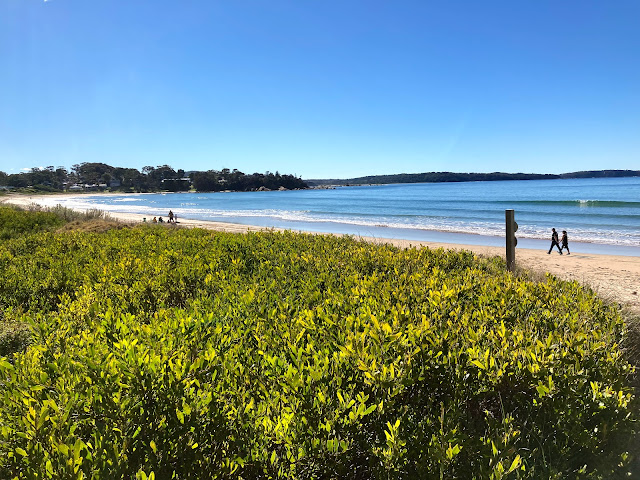 With the bad weather and the pre-planning I had a complete sewing fiesta. I had also been daydreaming at work for weeks about what I was going to make so there was a good head of steam! I made three shirts that were lovely, one that was a disaster and half a skirt. Fun.

Here's another old sew that I wore to work during the week and realised I haven't taken photos of for the blog - a plain jacket in some kind of tweedy polyester blend. The fabric is from Spotlight and certainly isn't anything to write home about; but I really liked the colour blend of pinks and browns. 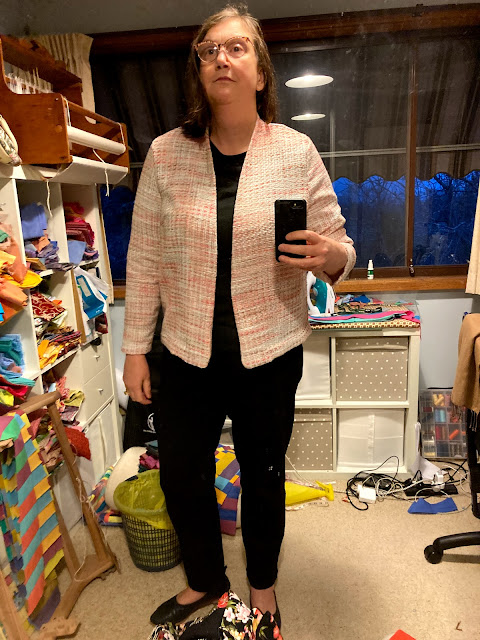 Another terrible sewing room shot! I am currently exploding in quilts of all different solids scraps, and there are bits and pieces everywhere. Including half-sewn tops, half-cut pieces, half-quilted sandwiches and new dyeing. I don't know what's going on, but I'm just running with it for now, at some point the mess will irritate me and I'll have a clean up. 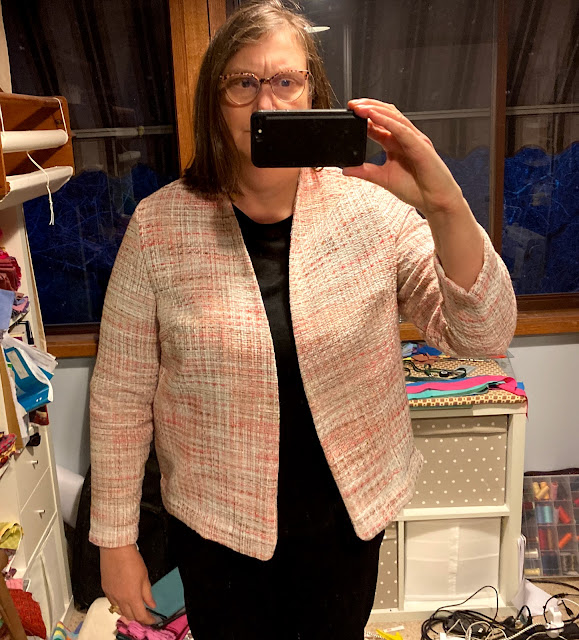 I used this pattern - Vogue 9338 -  but without any of the nonsense on the sleeves. 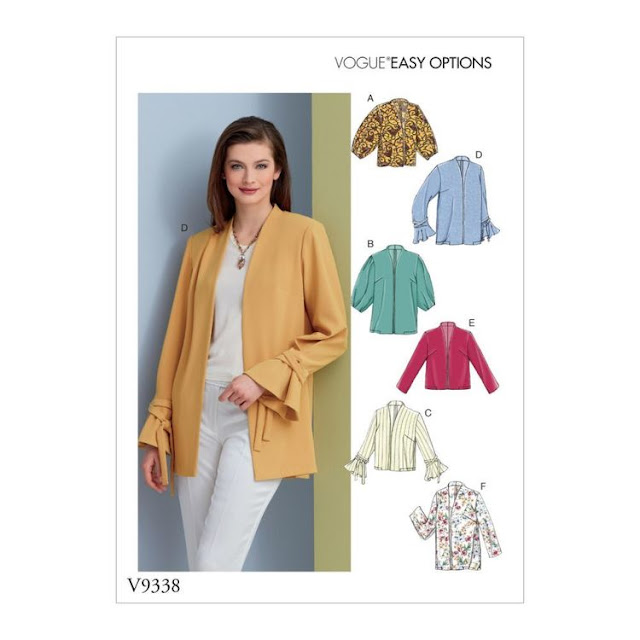 I like the clean lines of the slight rise in the collar at the back, and the bust darts work well. It is definitely on the roomy rather than fitted side but that's not always a bad thing.  I could get some kind of closure on the front ... or maybe a pin? Or maybe less is more. 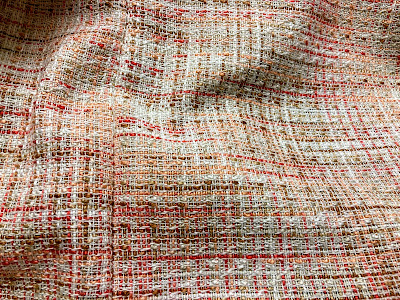 The weeks are for working and the weekends are for walking ... look how beautiful and still Sunday was. Not a breath of wind and the sun in sky. 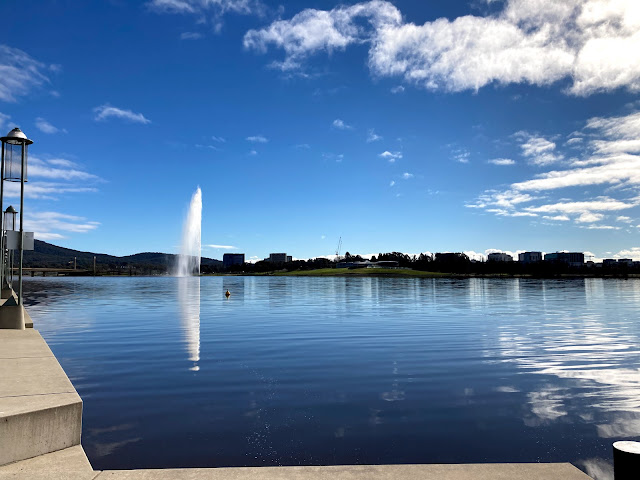 It looks almost summery until you turn and see the trees all bare. 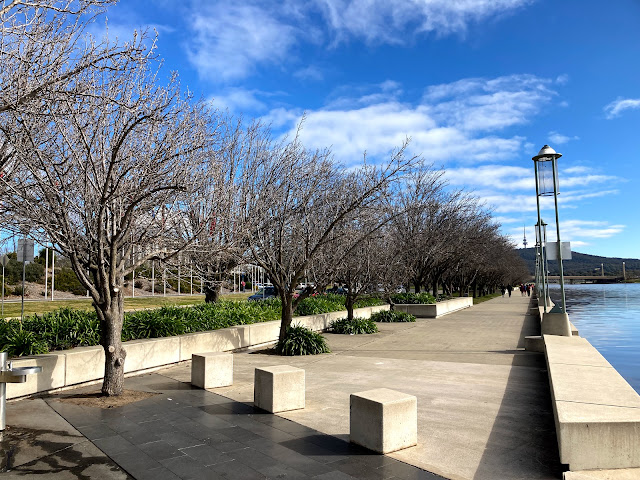 The end of the week has turned into rain which is always welcome. We are running very low on firewood with a promised delivery next week, but it's hard to be frugal with the fire when it's cold and rainy. Australia's debacle of a vaccine rollout has bitten us in the arse this week with massive outbreaks that aren't getting controlled - literally half the population is in lockdown. Not me, no-one comes to Canberra, but the news is depressing and ENTIRELY PREVENTABLE. Jesus H Christ.

Here is a skirt I made ages ago -  in summer, but it is definitely a winter skirt so I wore it to work. It is cold here and a bit foggy in the mornings and dark by the time I get home. 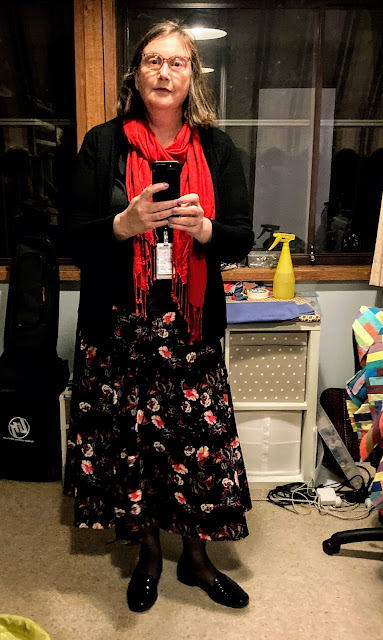 I bought this floral cotton/poly blend printed velveteen off the sale rack in Spotlight years ago. I do like velvet and anything with a nice texture, but it doesn't exactly lend itself to wearable clothing. I think when I bought it I was thinking of a jacket, but really? Velvet flowery jacket? I would never wear it, but a nice soft skirt, sure. 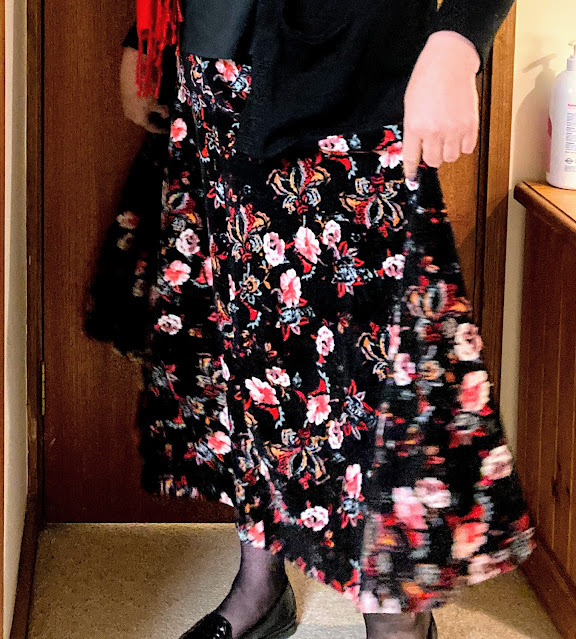 These are even more terrible photos than usual. I used the McCalls pattern I've used many times before, so it's on a yoke, but not a full circle skirt. I just cut to the maximum width I could from the fabric I had available, so it's a reasonably full a-line. And nice and whirly to wear, and warm! I should wear it with my cape (NO I SHOULDN'T) 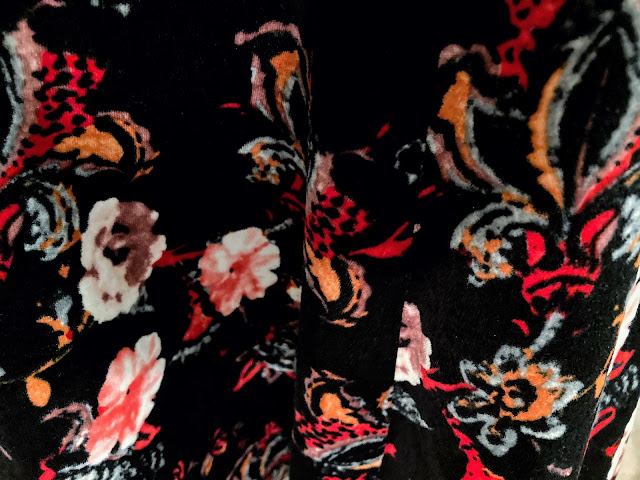 The weekend was quiet and fairly dull. Construction noise continues unabated over the back which is not a soothing way to wake up. I have made a formal complaint because that is the kind of person I am but I very much doubt it will make a difference. Back to school this week, which has been a shock to number two ... still another couple of weeks before uni starts up again for number one. Hopefully less nerve-wracking this semester because of the great results achieved in semester one! Not surprising because of the hard work that was put in, but still a relief all round.

Not much going on

No sewing photos, or quilting photos, or even pretty scenic shots today! I did go for a nice long walk on Saturday morning (didn't shave any time off the route, it was 2 hours 58 minutes) but it was windy and cold and cloudy, so I wasn't moved to take photos. Then we went off to a friends' place for lunch, which lasted seven hours and much very bad playing of pool but I was too busy eating and drinking and bad-pool-playing to take photos. Sunday we went to try and find lights for the big living room and have meatballs at Ikea, so that's not very photogenic either! But I did look for a decent photo of the living room to show the challenge we have. Wooden ceiling, brick walls .... 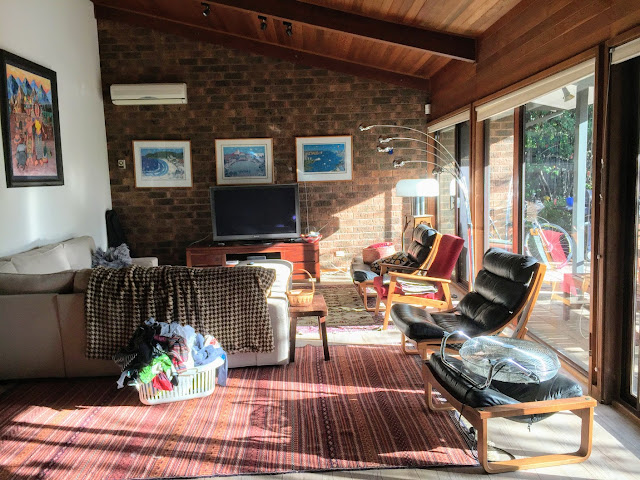 Those track lights are useless. Four of the six don't work and we don't have a ladder long enough to change the bulbs. Even when they work they don't light the room (and barely light the ceiling) and they look terribly ugly. We want two fairly dramatic pendant lights but not ones that just funnel the light down, because that will make the ceiling very dark. We also want something that suits the 1970s house, without being all shag-pile-retro, and of course we don't want to spend thousands of dollars on designer lighting. Although I did go down a few excellent rabbit holes of posh things. Some of it is absolutely beautiful! But we don't need bespoke. 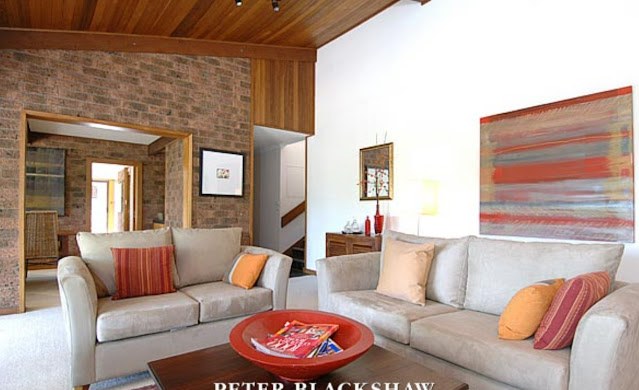 One thing it made me do was look at the pictures of before we bought the house, when it was dressed for sale. Ooooo, fancy, look at that matching sofa cushions and 'artwork'. Never been so clean since....

Every time I go through the fabric pile down the coast in the cooler months I keep coming back to this beautiful heavy wool. I bought it at the first church craft de-stash sale a couple of years ago - 2.5 metres for $15. It is lovely, super warm and super bulky and - which I didn't know when I bought it - made in England. 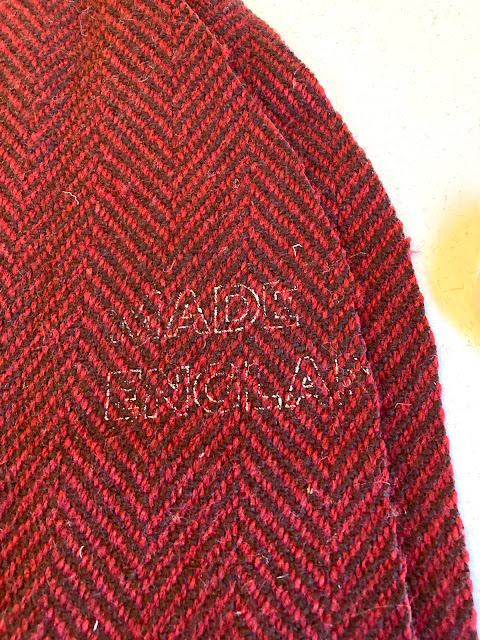 Isn't that cool? I hadn't seen a marking like that before (and it doesn't rub off or anything, which is why it is now firmly inside the hood). The trouble with this heavy blanket style is that it does not lend itself to easy sewing. I have pulled it out for various coats and jackets and then rejected it for anything with lots of seams or bulk. Which is most coats. And then, when I was looking for something else, I found Vogue 7641 from 2002 which I bought when I was pregnant, because apparently pregnant ladies need capes? Or wraps? 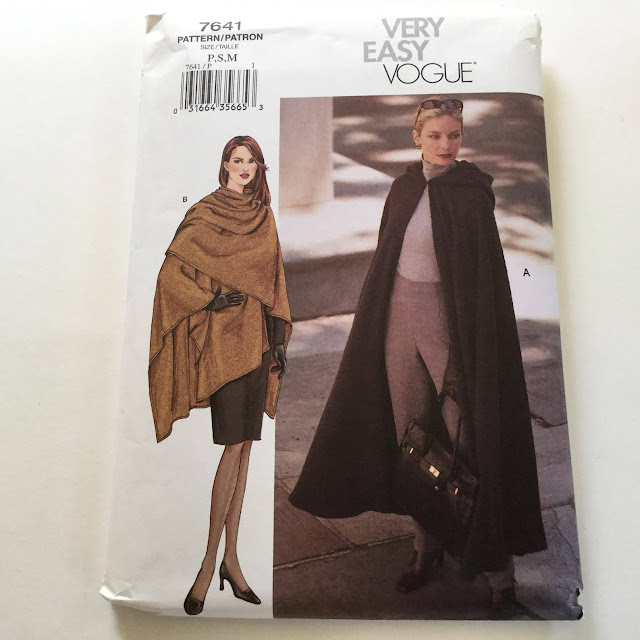 Anyway I never made it, because who wears capes? Nobody, but dammit once I saw it on the weekend I really wanted to sew one. How much fun. 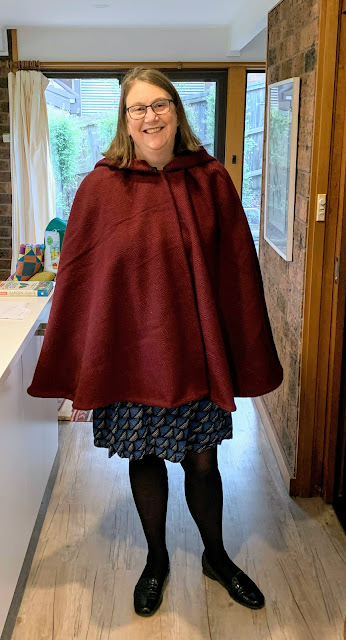 And it was fun, although the hood is ridiculously huge - it has pleats at the neckline for added space. You could fit Voldemort in there, as my husband kindly pointed out, and when I have the hood up it looks more than a little Ewok/Gandalf/hobbit. There are limited seams, which was very kind on this wool, and I bound the edges with bias binding, so just one turn-up layer of fabric. I hand sewed it down, (and pressed it, although it doesn't look it) which took a while, then a snap at the neckline and away we go! 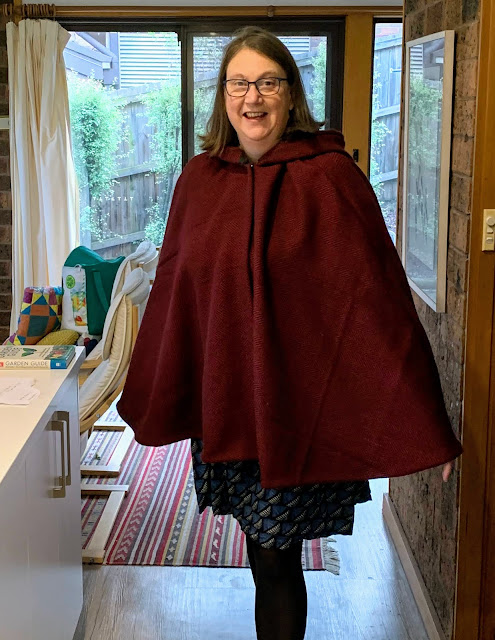 I wore it to work on Tuesday because my husband dropped me off and picked me up so number one could have the car, which inevitably means a few minutes waiting outside, and it was COLD. Except for me, in my giant wearable blanket. It is so heavy it creates its own microclimate of happy warmth. I thought it might be a pain  not having arms but it's not at all, and it's sooooo swoooshy. I probably looked odd but I felt very happy. Capes!