I'm taking advantage of January to wear pretty skirts into work - I suppose I could do it all year round but I tend not to - boring public sector worker and all that. It seems to call for black polyester. This is a cotton-linen blend skirt that I made in December and I think it's nice. 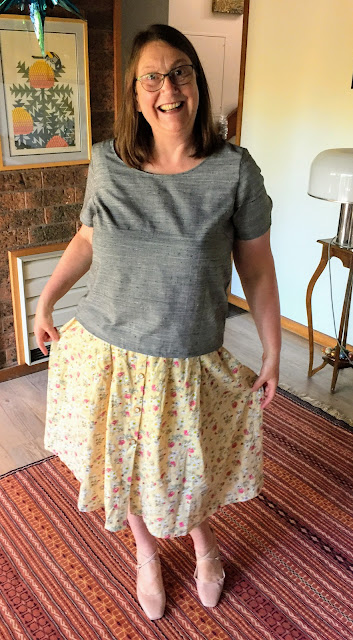 This is me showing how pockets work. 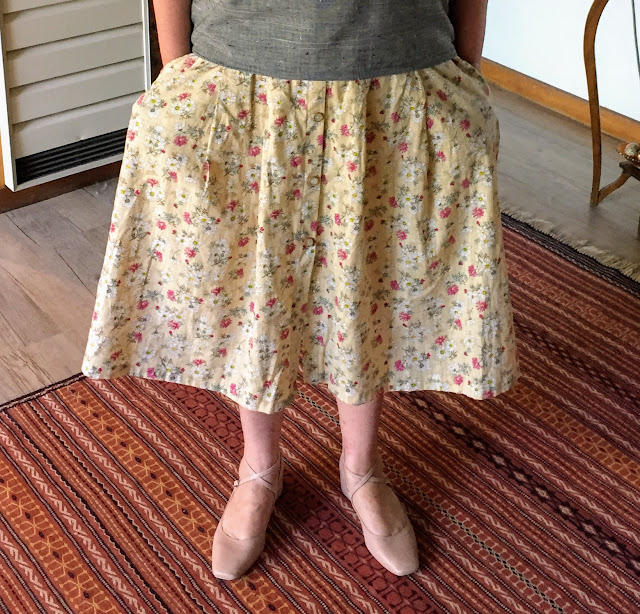 I hacked a culottes pattern that I already had into a skirt because I wanted pleats at the front, with pockets, and elastic at the back. It was a super easy hack (turning the crotch curve into a straight line basically) and I knew it would fit around the waist because I'd made the pants before. I just did a basic placket at the front with buttons and bob's your uncle. 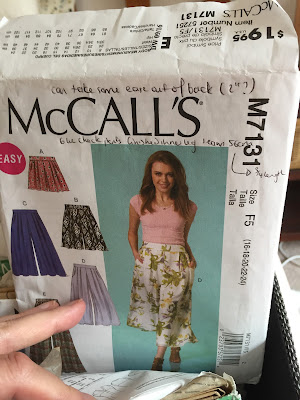 The fabric was one of my trial purchases from Rainbow Fabrics in Sydney - just a random on-line shop found by googling but inexpensive and I'm really pleased with the quality. It was lovely to sew although will wrinkle a bit, as you can tell the photos. Very satisfying all round. 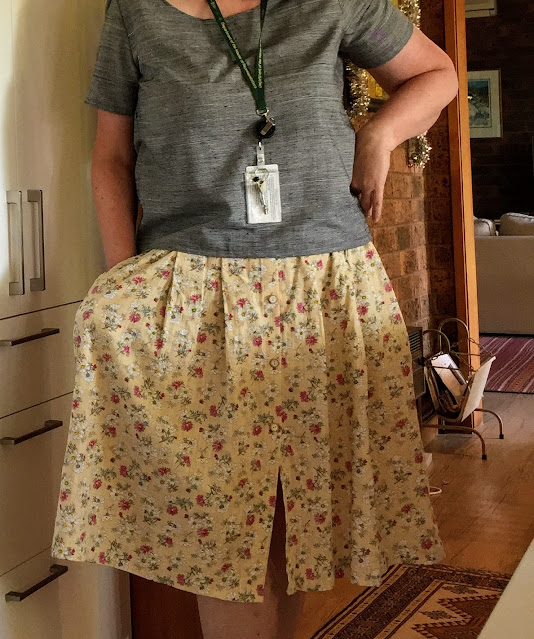 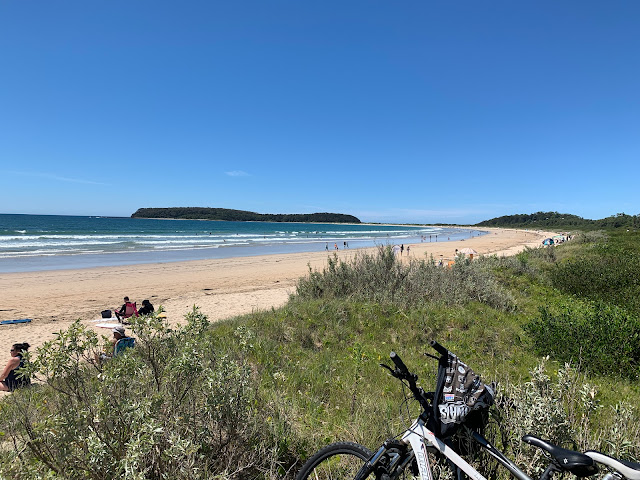 The forecast was for heat and sun so I went down the beach Friday after work and came back as late as possible on Sunday; and it was glorious. Perfect beach weather and decent waves. Crowds of people of course, but that's OK, it's nice to see everyone out and about enjoying themselves. 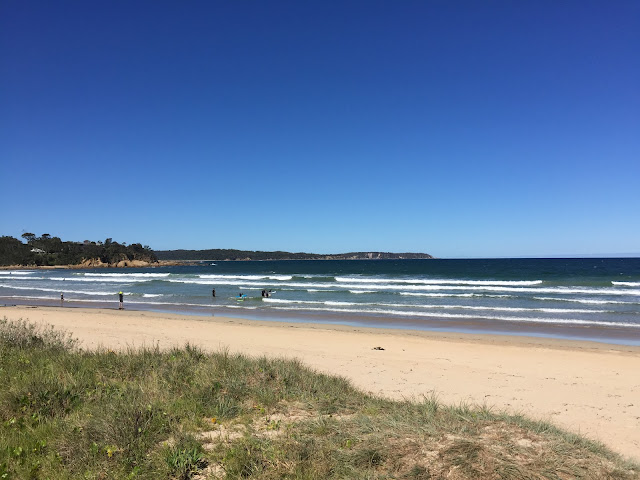 The South Coast continues to sit in a covid-free zone ... even though it could change overnight I felt comfortable to go down there. I'm not actually worried about catching the virus, given I don't go out at all, it's just being forced into self-isolation in Canberra if Bateman's Bay suddenly flares up as a hot spot. I have a few friends who were caught out by the sudden Brisbane lock down and Canberra's imposition of a iso period - a quick holiday turns into a sad fortnight at home. Or a happy fortnight at home, depending on how you look at it. 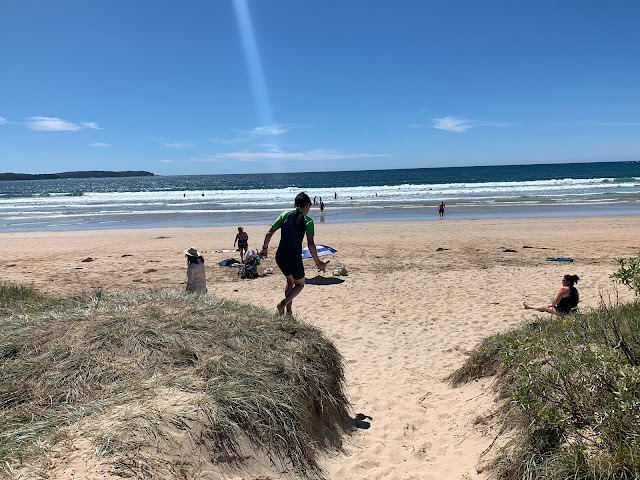 I went for a lot of swims, caught some big waves, got completely dumped by waves, did a bit of sewing and read some books. I laughed at a lot of memes inspired by the storming of the capitol (yes, I know it's serious, but it was also a gift to the humorists of the world). The rest of the family stayed at home and went to the water park with mates / shopped for a new bed / bought the promised Christmas present / did a lot of washing. And now back to work....
Posted by Lynley at 11:51 AM 2 comments:

Here is a shirt I made in December and wore for Christmas-related celebrations. Not many of course - especially not big work ones, thank you covid - but I did wear it to work on Christmas Eve where there may have been a little morning tea for the few remaining workers. 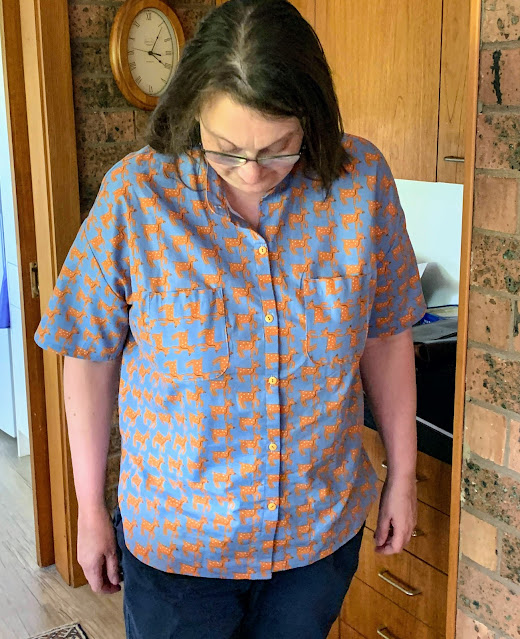 It is yet another Deer and Doe melilot shirt without the collar but with sleeves. It is a heavier cotton and I think the pattern works better in lighter fabrics, but it was still an easy make and it fits me fine. I thought the little deer were reindeer but they don't have antlers, so it could just be a deer shirt that has nothing to do with christmas at all ... I will call them reindeer and so they shall be. Gosh I look a bit pale and tired in this photo - I think the week before the break we were all starting to wear out a bit. 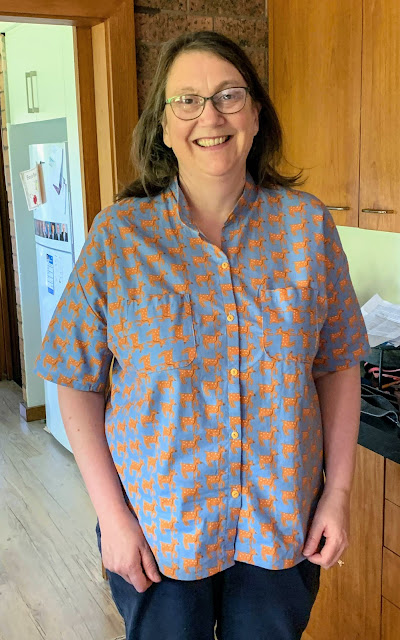 The sideways deer on the pockets was definitely a conscious design decision, and not just randomly how they turned out. No no no.

And welcome to 2021! It has certainly started well with an extended beach break .... I set an early alarm for Boxing Day and hurtled down the hill (no traffic, it was great!) and stayed there until my early alarm this morning to drive up and straight into work (no traffic, but driving for two hours then working is a bit exhausting). So that was nine days of uninterrupted beach time - unplugged and unstressed - and it would have been perfect except that IT RAINED EVERY DAY. 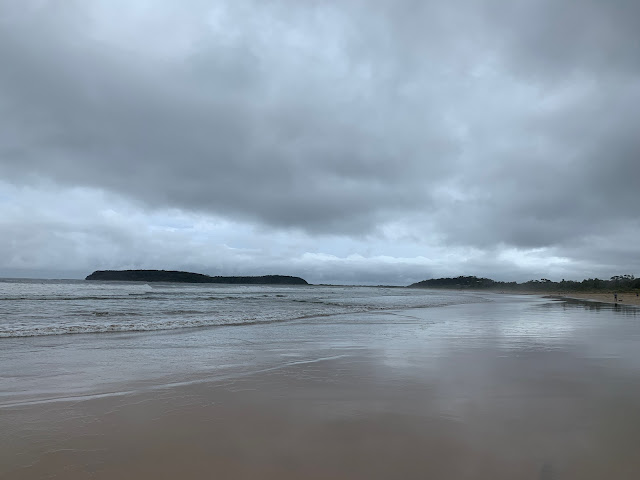 It has been (and is still going!) the worst stretch of weather I can remember at this time of year - cloudy and cool. I think the hottest day was 22 degrees which is ridiculous. I know I shouldn't complain remembering last years hellfire but I was expecting something slightly more summery. The nicest day was the 27th which was sunny and lovely until the late afternoon - and that was the day the rest of the family drove down, so they got half an hour of sun before the clouds rolled in. 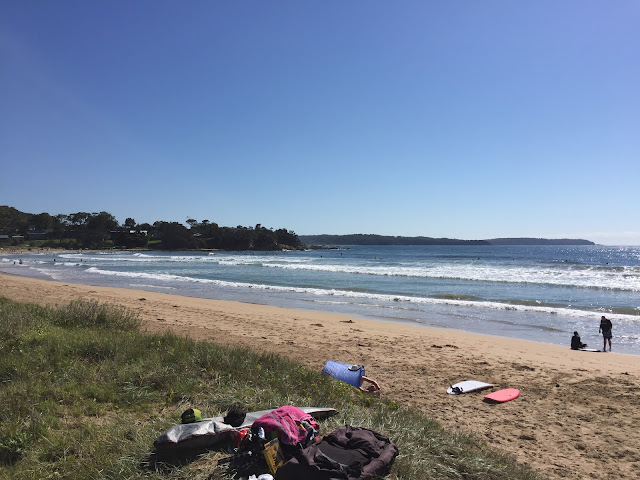 I swam every day because the mornings were usually dry, if cloudy, and I have a full length wetsuit dammit! The waves were good and of course swimming in the ocean is delightful, no matter the weather. The families were out in force of course - three year olds don't seem to feel the cold - and it was lovely to see crowds and life again after last year. 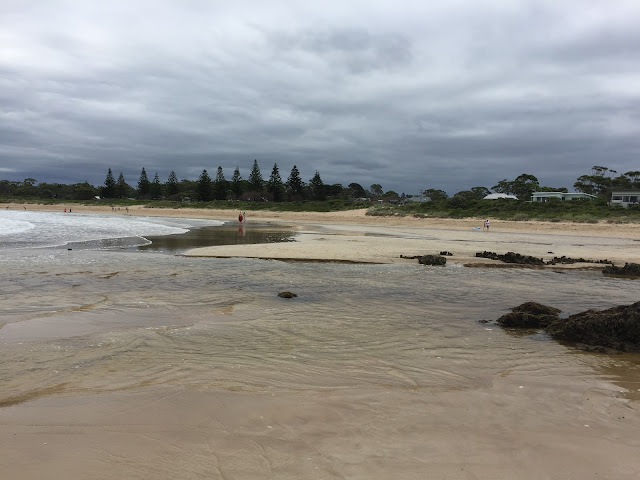 We were a bit on edge that the region would become a sudden hotspot and we'd have to do a mad rush up the hill before they closed some inter-state borders, but it didn't happen. Victoria closed the border to NSW at one point so all the Victorian number plates disappeared in about two hours as people raced back to beat the midnight border closure ... not really a closure, but a requirement to self-isolate for two weeks, which most people would rather avoid. Greater Sydney is still looking a bit dodgy with a dozen or so new cases every day, but the lockdown seems to be working as planned. 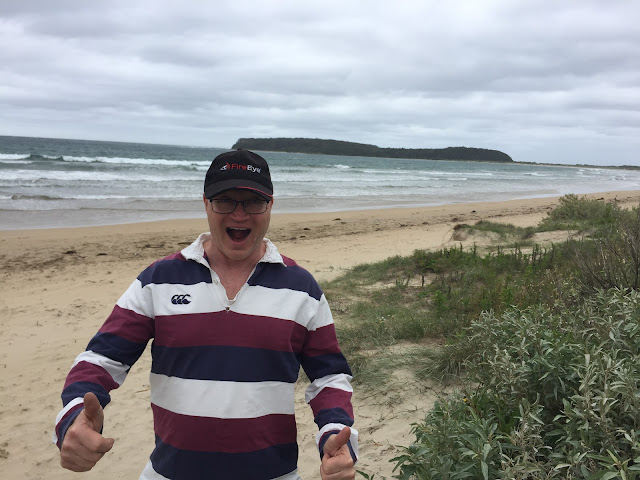 I will risk the beach again I think for a weekend or two later in the month, it's so worth it. I did a lot of sewing, read lots of books, ate a lot of toast-based meals and drank a lot of sparkling wine. It was lovely. 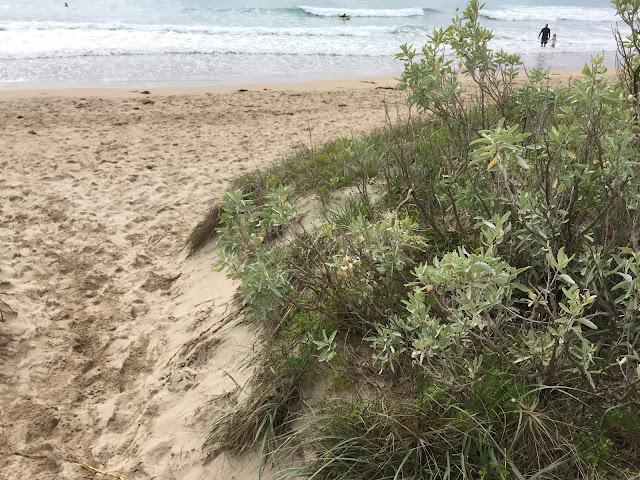 Merry Christmas everyone - I am so looking forward to a break which may - covid-willing - involve some beach time! The Sydney outbreak looks like it's on the decline with only 8 cases yesterday; they've put some serious lockdowns in place so it should keep shrinking. Famous last words! I like looking back on these blog posts with my narrator voice on "But she was wrong. It was not on the decline. Even as she wrote those words, a mutant strain was brewing in the Dee Why bowlo that would change the face of Christmas .... for everyone" etc.

Lifeline held its first bookfair this year which was a very joyous occasion. I don't think many people knew it was on because when I went for Sunday-afternoon-$20-a-bag there were hardly any people there and still masses of books. Good books too, so I filled two grocery bags to the absolute brim and I will enjoy them at my leisure. This is the desk in the bedroom. 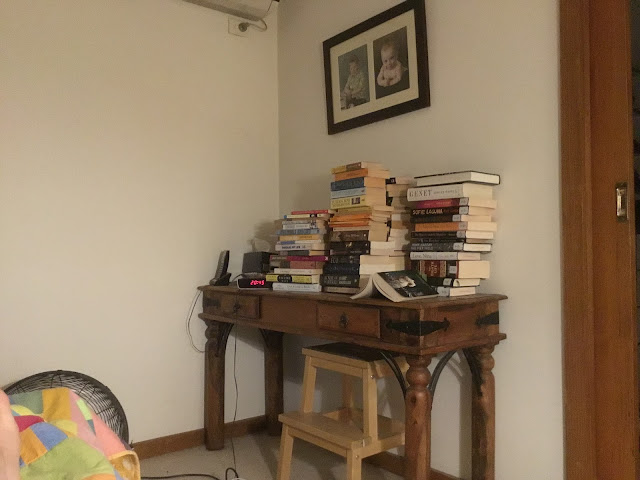 There are some library books in there too, just I case I run out. Despite working through Christmas last year to organise that massive conference I am not taking leave this year - just the time between Christmas and New Year when my organisation closes down. I feel slightly ripped off but there's not really any option given how short we are on staff at the moment, but I feel that I am owed a holiday. Perhaps March?

What a difference in a year 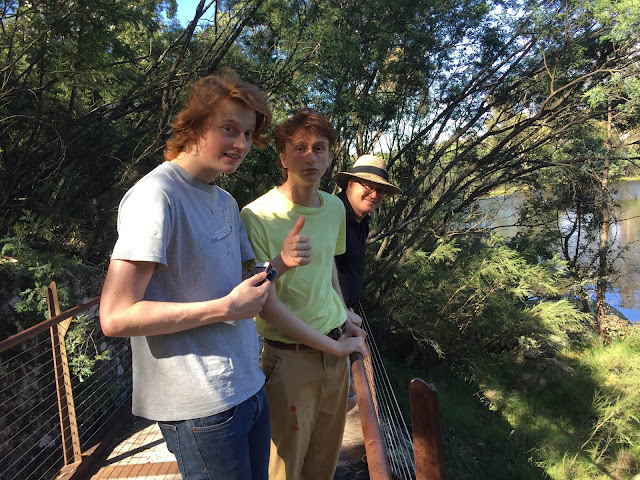 Ten days without a post! All I can say is that work is completely bonkers, and weekends are full of sleeping and socialising. We were meant to have a weekend away to walk to the top of Australia's highest mountain (not that high, it's a day walk, there might be snow or there might not) but the weather forecast was bad so we decided not to. Even though it's not exactly the Alps you still don't want to get caught in a sleet storm so we put it off until March. Apparently January and February 'the flies will carry you away' which doesn't sound appealing. So I went for my usual 16 km on Saturday morning and on Sunday afternoon we went (with the boys) out to Tidbinbilla to do the Sanctuary wetlands walk. 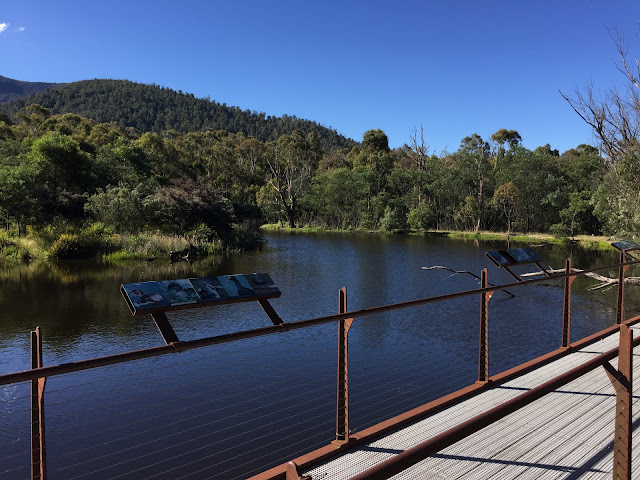 It's almost exactly a year since we were here with my brother and sister-in-law from NZ. It was shockingly, terribly, depressingly dry. These two photos are the same spot - a year ago and yesterday. 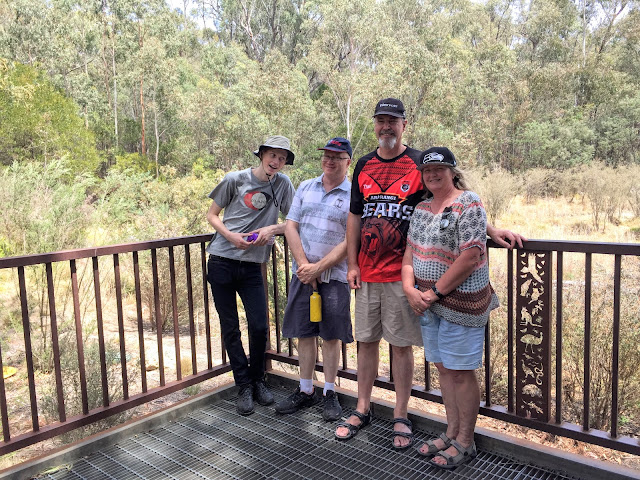 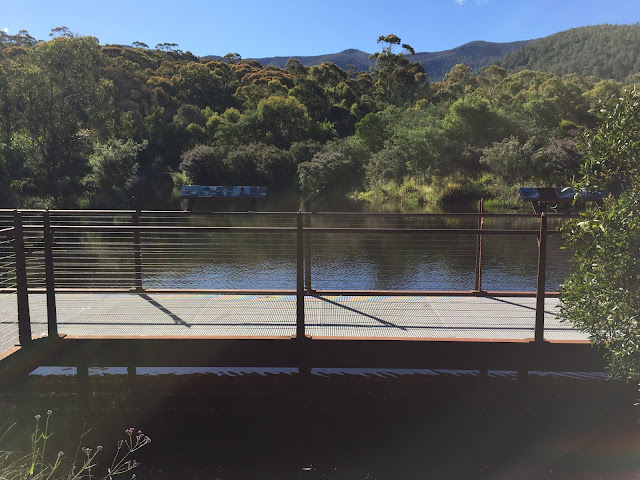 This is why Australia burnt down in January. Everything was bone dry and dead. 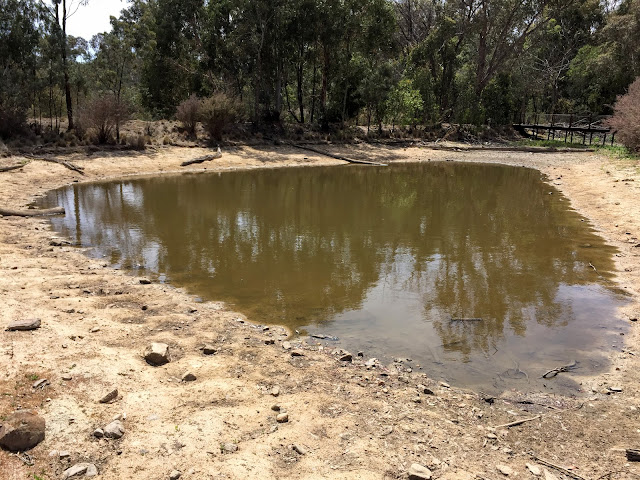 But what a difference a year makes. I know that something major has to be done about the climate or these dry spells will just continue and get worse, but in the meantime, it is very pleasant to see turtles and fish and black swans and magpie geese and even a tiny little Eastern bettong rustling in the undergrowth. 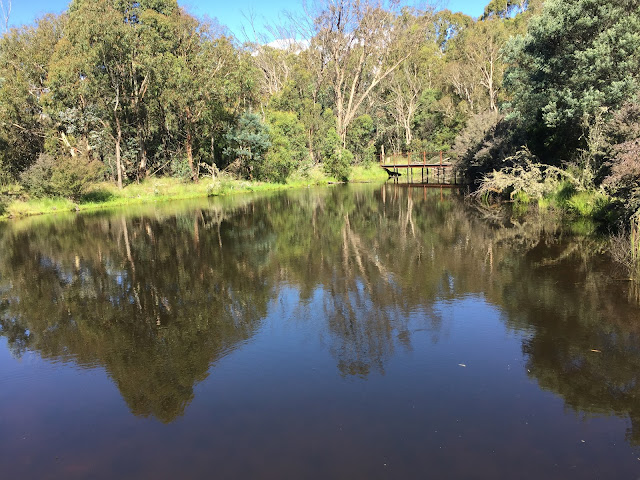 I'm finding a heap of good things to binge on Netflix and Binge and SBS On Demand ... which fits in nicely with lots and lots of weaving. Ages ago I ordered a very cheap microfibre yarn from Ice which I have never used - it looked incredibly shiny and plasticky and ugly, despite being a pretty blue. I wove a sample and it weaves beautifully; looks like twine, feels like silk. 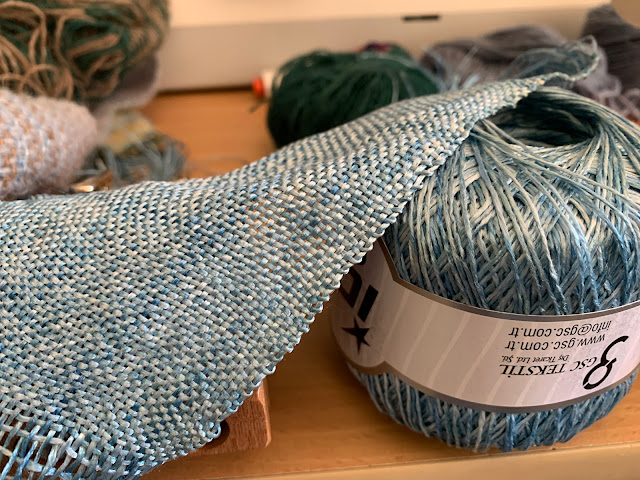 But I couldn't get over the appearance of it so left it in the cupboard until I was feeling adventurous a couple of weeks ago. I put it in narrow stripes with a plain mid-brown on the weft, and the pale blue fluffy alpaca blend on the weft. And it's lovely! The bit of shiny is fine, and the colours blend beautifully. 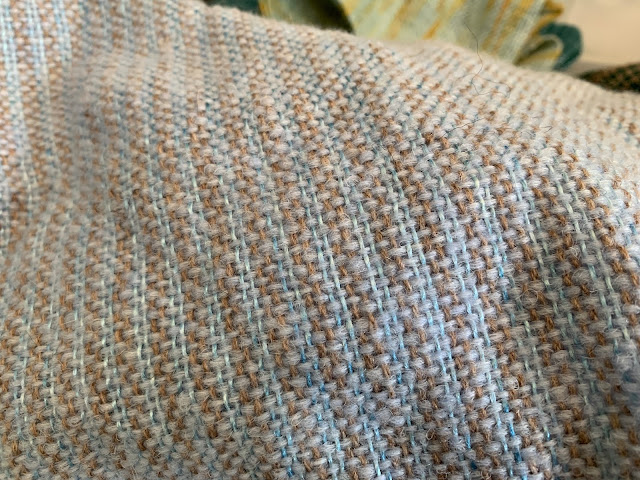 I was so pleased that I did the same thing with green: plain wool and shiny stripes on the warp and a fluffy mohair blend on the weft. That turned out nicely as well, it is very light and flowy. 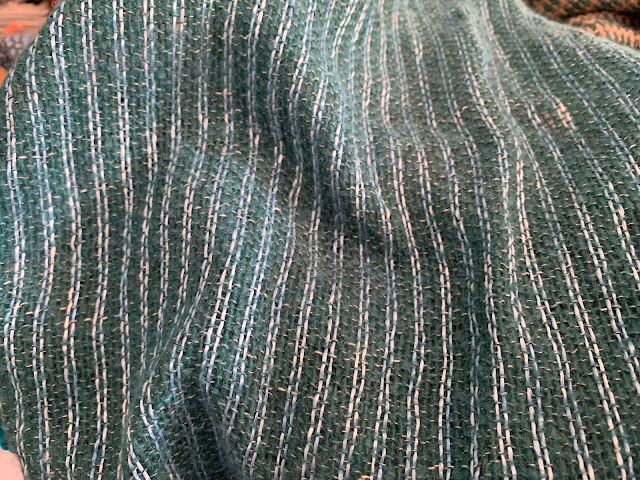 So I decided to go the whole hog and do a full warp of the peculiar microfibre (which made it much easier to deal with, unsurprisingly it stretched completely differently to the wool yarn so stripes was a bit awkward to manage) with my dyed blue/yellow on the weft. And I'm pleased with that too! 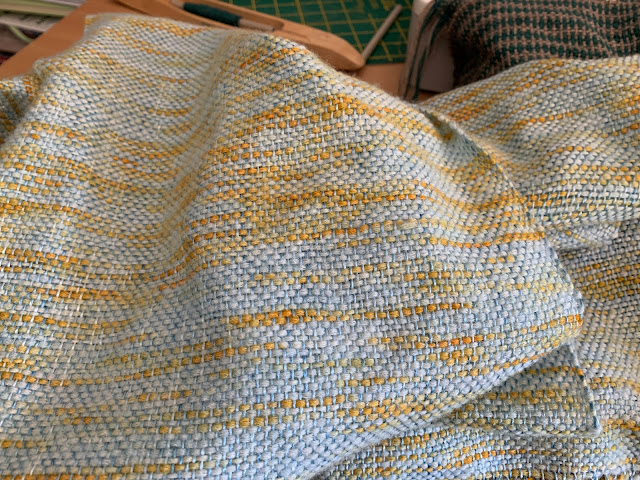 Except for the ugly plasticky fringe. I might just cut it fairly short and forget about it. You can't tell from photos but it is very soft and drapes beautifully. 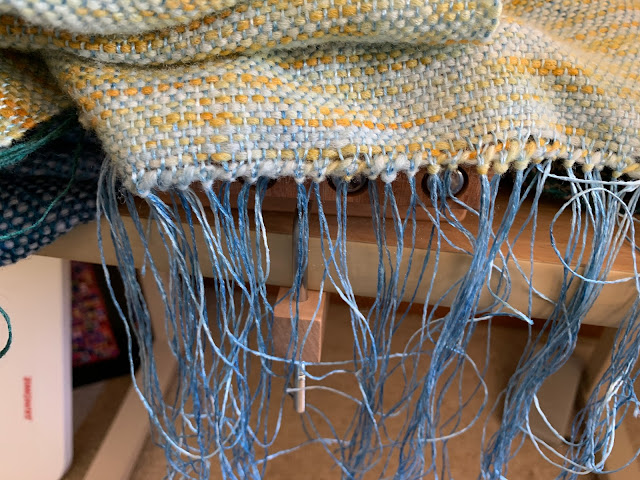 And finally here is one that has no shiny bits at all, just the brown and green in a 3-1. This is a cool threading because it makes two quite different patterns on each side as you can see below. The colours aren't very exciting but it would probably be quite a practical scarf to wear. 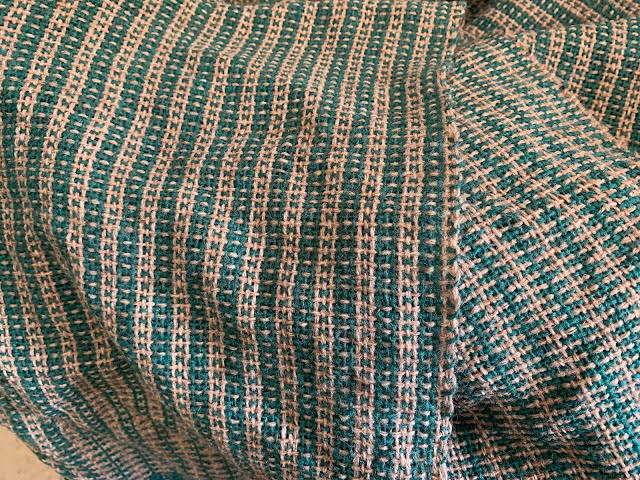